Tonight I responded to someone on FetLife who was rather personally offended that the term patriarchy had been applied and connected to rape culture.

The offense started with a photo of a brilliant exchange that blames a mugging victim for being “generous” and having “post-donation regrets”. It ended with “Fuck the patriarchy”. 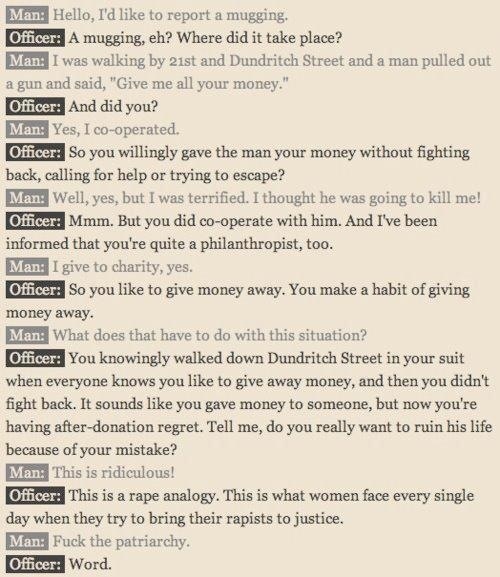 I found it an apt way to describe why people (mostly women) don’t report rape or sexual assault. but this special snowflake found it “selectively prejudicial” and interpreted all of this to mean that “any man in power” is to blame for rape culture.

From what I gathered from his very lengthy exchanges with anyone who bothered to clear up that misinterpretation he apparently is above all of that and was hell bent on demonstrating both his lack of prejudice as well as his stand-up-guy-ness in terms of rape culture.

The exception-to-the-rule guy. Which of course is another way to sidestep analyzing and thus acknowledging any relationship between patriarchy and rape culture and instead do a very um…patriarchal thing and dismiss the critique of the connection or existence of either altogether with his singular but stunning example of being such an awesome guy while still defending his fellow men (good and bad) from further “discrimination”.

Ummm…K. If patriarchy were actually about that and not a sociological descriptor I could see his issue. But the problem flows not just from a fundamental failure to understand the meaning of the word patriarchy, but also any observance of its influence in society. Gah!!!!

Because it is 4 am and I’m sleepy this the best I could do in response.

So….we are going to make what is a societal and cultural issue, well documented sociological and cultural norms driven by history of male-dominated societies that enforced its entitlement to be the owners and controllers of women, their bodies and their power … and instead make the issue all about you and how you personally never did these things?

Let me provide some perspective from where I sit, what I have studied but more than anything what I have observed and experienced. This isnt about you…this is about ALL of us.

Religion, government, and societal structure itself is interwoven with the values of this influence so deeply that most of us don’t even notice it. Even if you were to consciously fight it with every breath you take, we all participate in a patriarchal society. Many people (again, I’m sure not you personally since I would never presume) have a dominant and persistent image of “God” as a male, father figure. And they feel a disturbance in the force if someone dares to put forth an image of god that is either female or both (or all experiences of gender) to the point of enacting violence for such a heresy. We live in a society that minimizes a woman’s ability so much that we have to literally change our laws and regulations after years of struggle to ensure fair pay for equal work and to actively serve in combat. Not to mention the fact that it is deemed an acceptable and even expected topic to discuss whether a woman is emotionally capable of making the big, hard decisions of being President.

What you say is discrimination actually flows much deeper than that. Discrimination is beyond an instituional level. It is at the core of our society. We distinguish between weak and strong, male and female, haves and have nots…. We love having a dichotomy and highlighting the differences between us…not to celebrate them but to create reasons for one of us to feel superior to the other. . It is written into our thoughts, our values and indeed our decisions…usually without ever knowing it is truly there.

I’m sure you notice that women are still valued on how pretty, attractive and aesthetically pleasing they are. Women are expected to take a compliment regardless of whether they want to be valued for their tits and ass, “bedroom eyes” and figure. Women are still rewarded for being pleasing to men and subject to cruel jokes and jabs about “beer goggles” when they are not. And when women are fed up with being sexual objects they are subjected to verbal and sometimes even physical harassment all in an effort to control women and assert power over them.

But being above all of that I am sure you point that issue out consistently to your friends and family and are sure to compliment women primarily for their non-physical attributes.

And you know what, it’s okay regardless of whether you have or haven’t. Guess what? We all do it and continue to do it.

As a woman I was taught to seek the attention of men, to seek my value in the eyes of men. Why? Are men superior judges of character, beauty and value? But because of that I find myself getting depressed about my weight, my appearance and my overall sexiness factor because I still have phrases like “good enough for a blowjob” or “better work on having that inner beauty since that’s your best shot at getting anyone to notice you” floating in my head. I hear comments that showing my fat while belly dancing is vulgar and disgusting. And guess what…it’s not men who said that to me. It is women too.

And I’m sure the natural inclination for someone is to look at what I just wrote here and say “OMG, Bella, but you’re beautiful”. But that is sort of the point. Patriarchy teaches us to 1) value women for their attractivenes/pleasing qualities first and 2) if a woman is sad, hurt or even expressing disappointment that we have to fix it and reverse it–essentially take care of her with paying attention to what she says she needs or what boundaries may be appropriate and 3) if she rejects our oh so reasonable efforts to help, protect and care for her by establishing and enforcing boundaries then we must devalue her to the point of dehumanization. All the while ignoring the essential question “why should beauty/sexual appeal/attractiveness” matter at all? The compliment, the care taking and the valuation doesn’t solve the very basic dilemma. what it does is reinforce the patriarchal standard and makes me more dependent on that feedback rather than just loving exactly who I am for everything I am.

We live in a society that rewards competition over cooperation, physical prowess over emotional capability. A society that values control over expression.

And funny enough we don’t have to turn to an episode of Mad Men to hear these values (which is sort of the brilliance of the show–we haven’t come as far as we think we have). We watch shows paid for by Viagra (and viagra solves a men’s issue making it easier to sustain an erection to satisfy men…and the advertising has started to focus on trying to sell it as a women’s issue…but similar products for women’s sexual issues are where exactly?)

We celebrate winners who tore apart their competition instead of recognizing the value that each person brings (Hunger Games lite) . We complain when losers are complimented or rewarded. The kicker is that when we encounter someone weaker than us or who we view as weaker than us suddenly we know more than they do about their situation and offer our advice regardless of whether it was sought. We try to fix the problems we think they have…with a false sense of superiority…and justify it with “taking care of them”.

Rape culture and indeed the act of sexual assault and rape itself is a matter of asserting control and power over another person. The victim does not even have to be female (and imagine the numerous male survivors who are shamed into never sharing their stories because of the appearance of weakness) to be effective nor does the offender have to be male. And the patriarchal society either actively encourages it, dismisses it or ignores the issue altogether. Patriarchy and rape culture are locked in a desperate mutually beneficial embrace.

But the point is we ALL do it. You are not an exception to the rule any more than I am. Males AND females participate in this society established as a patriarchy many centuries ago and sustained through traditions that have been hard to shake. We buy into it and are drunk on the kool-aid not recognizing it for the self-limiting poison it is. So either we wake the fuck up and realize the influence and thrall that infiltrates our society, our collective and even individual decision-making process or we continue to passively assent to it passing it down to the next generation. This is about raising consciousness and awareness, not assigning blame to “all males”.

Congratulations if indeed you have risen above all of that and reject all the trappings that have been indoctrinated into our culture. And good luck navigating the myriad of interactions you will encounter in your quest along the way. Gold stars are available to reward effort and awareness. There are no winners in this race.