← The unsolicited cock-shot: boundary testing in a digital time
In the smallness of myself →

A Non-Con Weiner: The Bigger Danger

There are a 1001 posts rolling around in my head right now ranging from a critical assessment of the pejorative “self-indulgence” to the Pope’s recent statements about homosexuality.  But since I’m running a facilitated conversation about consent practices in the kink community within the next week, issues about consent are more prominent for me.  And where have consent issues been most irksome and public is with the Anthony Weiner sexting scandal. 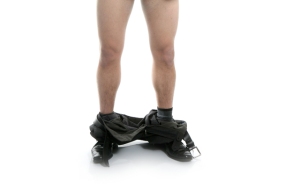 In almost everything that I’ve read reporters and media treat this as yet another scandal.  They cover the texts and explicit images that were traded with women and his brazen defiance to prevailing political wisdom’s call for him to step down from the NYC mayor’s race with equal amounts shock and consternation. And while I agree with the political analysis of this, most commentators focus on the sex

addiction (which is questionable) or the Carlos Danger = bad decision-making aspects.  Yet, they continue to miss the dangerous and pervasive cultural point that has a greater impact on his qualifications as a leader: Weiner is the equivalent of the creepy trench coat guy who got caught and expects us to give him a free ride.  And this troubling predatory behavior that has become all too commonplace and excusable.

Do not think for a moment I’m referring to two sex partners, romantic partners or even occasional fuck buddies who consensually

exchange explicit texts or pictures.  And at least some of the women Weiner has texted with over the years were certainly consensual.  See, my issue isn’t with the “terrible decision-making” that would make his run for mayor questionable.  Nor is it the fact that he’s unapologetic about the impact on his wife or family.

It’s the fact that on at least one of those occasions and possibly more, he has sent those pictures and sexually explicit messages unsolicited. And it’s this level of aggressive and needy boundary pushing that makes it scary that he would be in a position of real power over New York City (or any agency for that matter) much less the obvious disrespect he has for the women he was doing this to after only a few messages sometimes.

And right now, the people who are raising this important consent issue are bloggers at Shakesville and Yes Means Yes blog but not the reporters, the politicos or the public who will get to ignore him at the polls.  And ever since I encountered another post from Yes Means Yes blog about the unsolicited cock photo is really about pushing boundaries, I have been starting to look at online behavior in a much different way.   And that level of boundary pushing nags at my mind throughout this latest scandal.

I agree with the bloggers and and tend disagree with the media and most of the opinion gurus, who come close without ever delving into the troubling behavior:

Weiner, who seems to have sent at least one illicit photo to a woman without any encouragement whatsoever, seems to have a thing for exhibitionism. Some might see in his behavior the online equivalent to donning a raincoat in an alleyway and flashing women who walk by, but others suggest he represents something else: A man whose deviance could only exist in the online world, which makes spontaneous flashing possible without the effort involved in the more traditional variety. “I’d bet my whole Ph.D. that he wouldn’t be standing on a corner doing that,” notes Barry McCarthy, a sex and marital therapist, and professor of psychology at American University.  – Bianca Bosker, Huffington Post

And yet doing it online relieves him of facing the immediate reaction where he otherwise would likely face inevitable punch in the face or the audible horror screams at his deflating schlong. For me this goes beyond mere thrill seeking or “exhibitionist” behavior.  It’s still non-consensual.

But more than that, I think Melissa McEwan at Shakesville really hits the nail on the head with this piece of wisdom :

Let’s be real about what sexual predators are about.  This isn’t about sex.  This isn’t about getting off.  This isn’t about pursuing a relationship.  This is about establishing an imbalance of power and control.  In this situation, Weiner was the guy in charge.  Making promises and pushing the boundaries of women online, escalating the pressure and pleading for acceptance of his wildly inappropriate behavior. 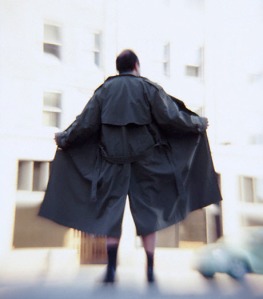 The Real Danger
But this wildly inappropriate behavior is so commonplace that it’s become cliche to pretty much any woman who uses an online dating site.  It’s not just the Weiners of the world who have engaged in this type of behavior.  I’d say about 60% of the men who contact me on dating sites do to varying degrees whether it be sending me the unsolicited cock shot or being so blatant as to make it their profile pic (quite common on FetLife).  I love Erin Gloria Ryan at Jezebel for putting together this nifty little guide to when a man should send a woman a picture of his dick.  But this tidbit is priceless:  And yet, he’s asking the people of NY to trust him making decisions for their welfare and enforcing the laws.  I dunno, do you want to give the creepy trenchcoat flasher that level of power? Over one of the most visible cities on the globe?  The fact that he refuses to take public accountability for his actions, accept criticism from political powers much more forbidible than he is (not to mention his wife’s boss), and of course the constant lying and covering up to the now blatant “fuck off” sort of attitude he is carrying around with him is dangerous in a policy maker.  (Oh and his staff calling a former intern who likewise critiqued him as a “slutbag” takes the whole campaign down the toilet of sexist rhetoric.)

Scenario 8: You are a Congressman and your ambitious, beautiful, and pregnant wife is never around and she’s like no fun at all and you just want to feel LOVED and ADORED and your ego is hungry, hungry for approval. Tons of hot chicks follow you on Twitter and Facebook, because you are a Famous Politician, and you just know they want to see your junk. Your perfect, unimpeachable junk.

Should you send the lady a dick pic? No, you fucking creepy dumbass. No you should not.

The fact Weiner is still standing isn’t a testament to what a big New Yorker he is.  It’s a testament to the powerful influence of predatory behavior.  Habitual, unrepentent and predatory non-consent is given a free pass if Weiner continues into the election.  Yes, the voters will likely give him the boot (I would hope so), but by then the damage will have been done.

The fact that he has a political career at all in this moment legitimizes every creepy guy who thinks an appropriate introduction into sexual contact is a virtual flash of his penis in a woman’s face whether she wanted it or not.  Staying in the race puts the mayor’s personal seal of approval on this all too commonplace violation of consent* in a digital age.

← The unsolicited cock-shot: boundary testing in a digital time
In the smallness of myself →