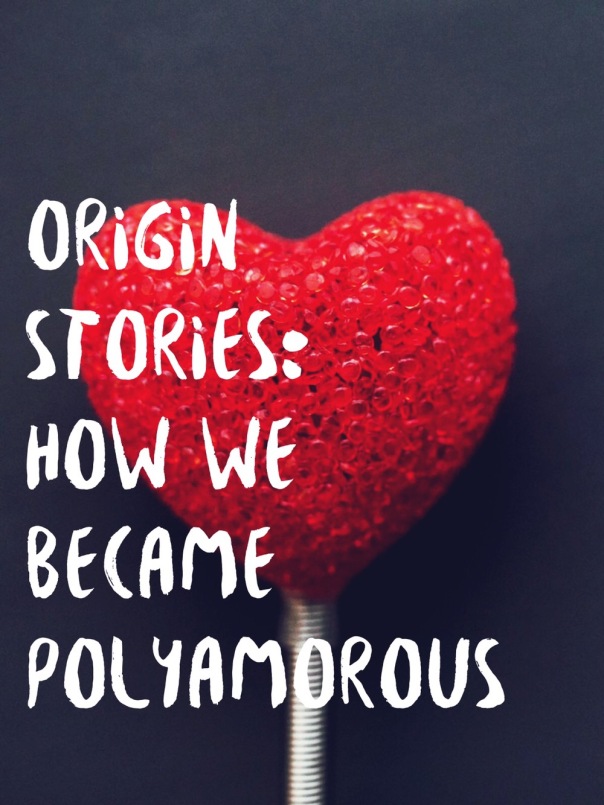 Everyone comes at polyamory from their own background and series of choices. For some, it’s their “cure” to cheating. For others, it’s a slow slide away from swinging and into more romantic partnerships with others. Others start it out as an experiment with fantasies until suddenly you can’t imagine what your life would look like without sharing it openly with others. And whether I’m talking about my personal origin — how I, personally, knew I was poly–or how my Husband and I came to open up our marriage, these are the fundamentals of what led us to where we are now.

While ultimately the decision was made on a Wednesday in July 2004, right before a Sarah McLaughlan concert, there were a series of events and conditions that led us to that decision. Here’s a look back at the major components that led to our polyamory story.

We are individuals who choose to share our lives together

I’ve known Husband-Writer since 1996 when we went on a musical tour of Europe together. He was a musician and writer with a generous soul and a sharp wit. We got to know each other very well on that tour and he quickly endeared himself to me by being in my life. Our love is based on the friendship we developed at the time, the rapport that was built on a shared sense of humor and a passionate love of expression.

I nurture his courage as a writer and as a father. I give him acceptance and motivation and honest but encouraging feedback on his characters and stories. He gives me unconditional support as I foolishly sacrifice once more to the world. He sees my vulnerability and emotions and calmly reflects the truth of myself back to me. We empower each other as equals.

Polyamory is first and foremost built on trust. Trust is deepened when you can separate your partner from yourself and see each other as full and complete human beings. Each person has their own ambitions, their own joys, their own memories, their own feelings. And none of those things are dependent on you, but instead are willingly shared with you. Your partner has chosen to share these days, these memories, these ambitions, these feelings with you and in healthy relationships, those aspects of our humanity are emboldened, enlightened and enriched. Our commitment is to bring out the goodness and nurture the talent in each other.

Husband and I are partners in this way. We each came into the relationship with our own needs, wants, and ideals. And in fact, we started the romantic part of the relationship 3 years after we had met, Beyond this, he was a full-time father to a brilliantly gifted boy (now man!?). We came to the relationship as whole people, not halves searching for completion. We have always created room to support one another with not just the mutual ambitions (like fixing up our house), but our individual ones too (like him publishing his first comic). And to do that, you have to truly see one another as individuals. And while there is some truth to sacred union aspect of our marriage–the union of two souls–we have never possessed each other the way other couples do.

There are a number of people out there who believe that it’s a badge of honor to “prove your love” through insane amounts of jealousy. When we got together just after I graduated from college (a year early! woot!), I had just ended a long-term contract/fuck buddy/live-in relationship with a man I call Navy Boy. He offered comfort and security without judgment or expectation. That had been the most comfortable I had been with commitment after the last official “boyfriend” became jealous and paranoid of all my male friendships to the point of telling me that once we married he would make sure I wouldn’t have to work since he wouldn’t trust any of those men around me. This contract relationship offered me the freedom to be myself while still allowing me to share intimacy with someone.

Navy Boy figures prominently into much of why we are polyamorous. When Husband and I started dating, I made it clear that I was friends with my exes, had plenty of male based friendships and was going into a male-dominated industry. If he couldn’t handle it, he had this opportunity to back out. He didn’t. He signed on for all of who I am, including these friendships and feelings.

See, despite the contract-for-sex relationship that Navy Boy and I had, I realized far too late that I loved him. I carried him in my heart from Chicago back to Colorado. That love has always coexisted with the love that I had for Husband and the love I had for my prior partners.  The coexistence of that love for many people has been a fact of my relationship since the very beginning. The security of my relationship with Husband has never been dependent on the absence of others. In fact, if anything my love for others has given him a greater sense of security–he knows that I keep choosing to share my life with him, a continuing commitment.

The security of my relationship with Husband has never been dependent on the absence of others. In fact, if anything my love for others has given him a greater sense of security–he knows that I keep choosing to share my life with him, a continuing commitment that we make each day to each other.

Jealousy has just never been a part of our story. We have flares of it. In the beginning, I was more jealous of the time he spent with his best friend and he was more jealous when I felt a connection to someone of a more political persuasion. But for both of us, we realized that this jealousy is more that we know those people can do things for the other that neither of us is able to provide. We’ve realized that jealousy is a signal of an insecurity, fear or assumption within–one that is best handled if we bring it up and discuss it, getting reassurance and love in return.

The first real signs that we would become poly was when we were preparing for our wedding through the Catholic Church. My church required that you go through basic premarital classes and counseling, especially if one of the parties is not Catholic, like Husband. As such, we took a compatibility quiz. The priest put us in separate rooms and had us rate how much we agree/disagree with 250 or so statements to measure our compatibility on things like finances, communication, family values, relationship, sexuality, etc.

As I went through the questions, I realized that they ranged all over the map, especially the statements relating to cheating.

“I believe that kissing someone else is cheating”

“I believe kissing someone else is cheating”

“I believe that  meeting alone with the opposite sex is cheating”

“I believe that looking at someone else is cheating”

I remember our scores were rather high, except with financial compatibility. The priest told us he wasn’t concerned about us because our score on communication were some of the highest he had ever seen. No matter what our problem, we’d be able to talk it out. If we hung onto that, we’d have a long and happy marriage.

This experience, more than anything, is what got us thinking that there wasn’t really one definition of cheating, that we could decide for ourselves what it is. After a few weeks of talking, we decided that kissing and loving someone wasn’t cheating in our book. Anything beyond that had to be negotiated. This moment was the true start of us becoming poly although we didn’t call it that at the time.

This set the stage for the decisions to come.

This grew longer than expected, so I cut it into two parts. Stay tuned for Part II coming soon!