“Show us your boobs!” and issues of consent.

Since December I’ve been broadcasting weekly Periscope videos focusing on various topics about polyamory. I’ve been having trouble deciding when it was best for me to do these live chats. Lately it’s been Friday afternoons between 4-6pm my time. Due to having previous Valentine’s Day plans with Warrior, I was going to do this one around 10am.

Maybe it was the difference in time and thus the availability of people to join in and watch, but there were a lot more people than usual. And there was more interaction. For this topic I was doing this time, looking at the notes from the session about  Poly Political Resistance, I was flattered that I could talk about this topic with so many people. 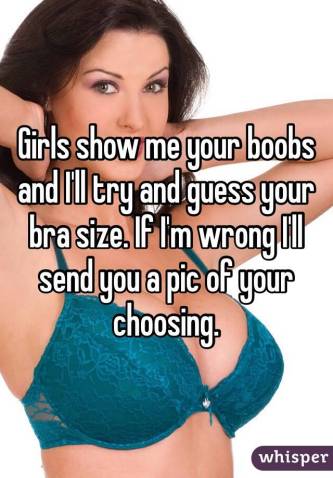 As found on Whispr. I see about 20 of these in a day. Entitlement to see a woman’s body is the norm I’d like to see more of us question.

As any woman who is active on the internet who even hints about sex on her profile, you’re inevitably asked to show off for your  (primarily) male followers. I’ve had a few comments here and there during the few weeks I’ve been doing this. The ones that are “hi beautiful” and then ask for me to show them my boobs. Usually I will just say no and move on. Asking more than once is enough to distract me from what I was talking about. (How sad is it that I’m so used to it that asking once doesn’t seem to phase me?)

Well, this Friday, someone was asking way more than once for me to show them my boobs. Daring me to block them to get them to stop. Because I didn’t know how to do that and obviously telling them no wasn’t going to work, I just ended the whole thing. (I have since learned how to block during the broadcast).

I got back on a few minutes later (Video here) and tried to pick up before I had been interrupted. I had a few minor incidents during the 2nd broadcast and tried to handle them the best I could.

“Oooh! She’s poly. That’s just because she wants sex all the time like some kind of slut.” I get lumped in with the personal wank bank fantasies of the insatiable female, so desperate for cock that she has to have it all the time.

And don’t get me wrong, I love that fantasy too. But  that doesn’t mean that real life men and women who are polyamorous are so desperate for dick that they will willingly do whatever you want to get at yours. Frankly, we can afford to be choosy. Most of us are getting it from multiple partners and aren’t likely to be doing poly only  because we’re desperate or somehow still unsatisfied.

Demanding that anyone show themselves off solely for your own pleasure is an uneven exchange. What do I get out of this deal?  I show you my boobs and then what? I get the thrill of being seen? Please. I have weighed your request and have found it lacking. Request denied. And if I didn’t say yes the first time, it’s because I find no value in the exchange. You won’t convince me by pestering me for more.

But even the people that do love to show off or are down to fuck all the time are still doing so only with their consent. They control the terms, which may include payment for such privileges, and no whiners allowed.  The only thing that is a bigger turn off than a whiner is a whiner who will not respect consent.

Seriously, once I told this guy no, it should have stopped.

Once I told this guy no again, it should have REALLY stopped.

HE SHOULD NOT HAVE ASKED AGAIN.

It really is that fucking simple.

Consent doesn’t have to be some mysterious dance. We all know the basic steps, we just need some practice flowing with it, just like dancing. We need to learn to read 0ur partner so we can follow and lead together. It’s a symbiosis of movement, an agreement to dance this rhythm together. And if they say they want to stop dancing, you don’t keep twirling them around for your own pleasure’s sake. No, you stop, say thank you and if needed, find out if everything is okay.  Your partner doesn’t need an excuse for why they want to stop, they don’t need to justify the choice. They simply get to exercise that choice and you simply honor it.

Why is my NO not enough?

It wasn’t until I started talking to my husbands about this issue, the off-hand way in which I related it with the look of tempered alarm on their faces that I realized that this is a bigger issue than I had acknowledged. And the reason I can’t recognize it is because it’s just in my face all the fucking time. It’s a lesson we all know:

It can be dangerous to refuse a sexual request. 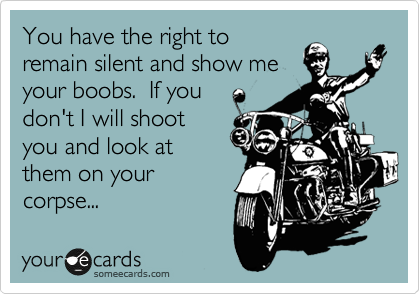 Truer words have never been spoken. Via: Google Images

He harassed me over and over and over again to do something that: a) was rejected, b) was unwelcome and c) was very inappropriate given the more serious nature of the talk. But it isn’t the harasser that bears the cost of the request – he can chalk it up to me being a prude bitch.

No, it’s the harassed that bears the cost of refusal. It’s me who was interrupted. It was me that had to put everything on hold to deal with this guy, thus also putting on hold my talk, my priorities, my ideas. It’s my voice that gets silenced when my boobs matter more than my ideas. Ultimately, it’s me who has to pay because I said no.

It rattled me, it phased me, it later disturbed me. It took me a few days to put my finger on why–it’s because of the times that my life has been in danger for saying no.

A lot of the basis of the work I do is due to becoming sexually confident as a survivor or rape, sexual assault and intimate partner violence. I have clawed my way back to the land of the living, the sensual, the beautiful, sexually self-aware. I have earned my sexuality and I have earned the right to speak my consent, to negotiate on my terms, to have control over my own body and self. And no one ever gets to steal that away from me no matter what shame, guilt and harassment is laid at my door.

But this incident of repeated and even gleefully taunting dismissals of my consent was only a reminder that I haven’t fully healed yet. Not sure if I ever will. Trump’s attitudes toward women and suspect history of objectification, minimization and creepy perpetration against women already has ensure that some of those wounds reopened. And what I learned Friday is that it’s still enough to rattle me, to get me off my game and lead me on a rant against those that associate polyamory with porn instead of getting through the material that I wanted to. When I’m rattled, I’ll be more anxious about my choices, more doubtful of my path, more vulnerable to self-criticism.

I am actively cultivating opportunities to write more often. I acknowledge that this is one of the dangers for me of putting myself out there more often. And I know it won’t remain so politely and persistently benign. I am sadly aware that this behavior will become my new normal. My new, triggery, fucking rape culture normal.